Showing posts from March, 2008
Show all

By Huanyan - March 29, 2008
I brought the cg to watch this very interesting movie which I have been waiting for a long time. It's called 'The Bucket List'. To make the long story short, it's about this two guys who found that their days are numbered, and decided to complete a list of things they wanted to do before they 'kick the bucket'. Hence the title. The ending was a touching one, one which I was moved to tears, although I have already known the ending.

I was struck by the reality of life and death in the movie, especially with the central theme focusing on these two guys, acted by Jack Nicholson and Morgan Freeman by the way. I was already thinking about my own bucket list before I went in to watch the movie. I left the cinema with more questions to ponder than answer to my own list. The movie gave me some food to think about. It asked 2 questions in the film:

1. Have you found joy in your life?
2. Have your life brought joy to other's life? 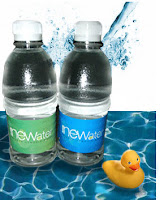 This is newater. You dare to drink?

I have heard a lot of comments about newater. Some of my friends saw it as sewage water. I saw myself in it. Why?

NEWater is clean water, engineered from sewage water through reverse osmosis. It is clean, unlike its past. As for me, I'm aware of the fact that I am a sinner, my sins and my past only washed clean by the blood of Christ. So I see the NEWater as a mirror of my Christian self.
Post a Comment
Read more
By Huanyan - March 19, 2008
Religion 'linked to happy life'
A belief in God could lead to a more contented life, research suggests.

Religious people are better able to cope with shocks such as losing a job or divorce, claims the study presented to a Royal Economic Society conference.

Data from thousands of Europeans revealed higher levels of "life satisfaction" in believers.

However, researcher Professor Andrew Clark said other aspects of a religious upbringing unrelated to belief may influence future happiness.

This is not the first study to draw links between religion and happiness, with a belief among many psychologists that some factor in either belief, or its observance, offering benefits.

Professor Clark, from the Paris School of Economics, and co-author Dr Orsolya Lelkes from the European Centre for Social Welfare Policy and Research, used information from household surveys to analyse the attitudes of Christians - both Catholic and Protestant - not only to their own happiness, but also to is…
Post a Comment
Read more
More posts