Showing posts from April, 2012
Show all

For this is home

By Unknown - April 28, 2012
It was the Axis official opening ceremony in the evening. Listening to the song presentations and the sharing by Ps Jeff, Denise Phua and the folks in the video for their testimonies, I just felt so touched by God by His providence and grace to the church over the years. As I always say, if it isn't for the work that He has done in Hope, I would not have met the people who brought me in and took time and effort to disciple me to where I am today.

In a very absolute way, the sale of Nexus was an emotional affair for me. But moving into Axis and able to be part of the journey has been a great thing for me. I was looking through the Uni-YA journey over the past few years before we merged to become our now Young Adult's Service and I was shocked. I was involved in most of the milestone events that were listed there. I was ushering for the first service at NTU Alumni House on 28 March 2008. I was moving logistic when we had our service at Sophia Room YWCA. I was moving logistics an…
Post a Comment
Read more 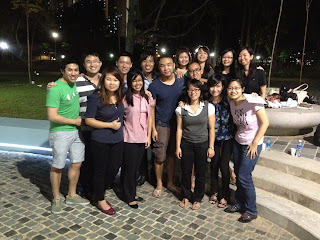 I am just showcasing my LG once again. One can never stop showcasing a group of wonderful people who add wonderful moments into your life.
Post a Comment
Read more

Apparently Straits Times published the results of a survey conducted by Institute of Southeast Asian Studies on the religious views of different denominations of churches in Singapore. I think they did a comprehensive job on the survey. According to the researchers, based on the results, it seems to suggest that megachurches are more conservative than traditional churches (if ever there's such a distinction). This seems counter-intuitive but at least I can confirm from what I know, as a member of a megachurch, that people from mega-churches are super friendly to people from all sorts of background. But not to discredit the rest of my fellow brethren from other denominations (so-called), one should not take it that people who come from traditional churches are more intolerant and such.

It is perhaps amusing that the researchers decided to divide their respondents into the four categories. But thinking about it, they seem to treat mega-churches as a category by its own, which I won…
2 comments
Read more

The story of Nick and Joe

By Unknown - April 17, 2012
I have heard a number of Easter sermons but the most interesting one belongs to one that I heard recently regarding how Nick and Joe saved Easter, telling the story of Easter from the perspective of these two jokers. Below is a snippet of their story (emphasis mine)
Later, [Joe] of Arimathea asked Pilate for the body of Jesus. Now [Joe] was a disciple of Jesus, but secretly because he feared the Jewish leaders. With Pilate’s permission, he came and took the body away. He was accompanied by [Nick], the man who earlier had visited Jesus at night. [Nick] brought a mixture of myrrh and aloes, about seventy-five pounds. Taking Jesus’ body, the two of them wrapped it, with the spices, in strips of linen. This was in accordance with Jewish burial customs. At the place where Jesus was crucified, there was a garden, and in the garden a new tomb, in which no one had ever been laid. Because it was the Jewish day of Preparation and since the tomb was nearby, they laid Jesus there. - John 19:38-42…
Post a Comment
Read more
By Unknown - April 10, 2012
“In the 1950s, kids lost their innocence. They were liberated from their parents by well-paying jobs, cars, and lyrics in music that gave rise to a new term – the generation gap.

In the 1960s, kids lost their authority. It was the decade of protest – church, state, and parents were all called into question and found wanting. Their authority was rejected, yet nothing ever replaced it.

In the 1980s, kids lost their hope. Stripped of innocence, authority, and love, and plagued by the horror of a nuclear nightmare, large and growing numbers of this generation stopped believing in the future.”

I would add that in the 1990s, we lost our ability t…
Post a Comment
Read more

Quitting being a Christian

By Unknown - April 09, 2012
I guess the title alone inspires shock and disbelief for my readers.
Without going much into the context and further explanation, thoughts of leaving church and leaving God might even come to mind.

Before I go on further, let's just be assured of identity and let's not be caught up by terminology which may not mean anything. In this case, it does not really mean anything. The term 'Christian' appears in the New Testament three times, and from what I know, historically in the times of the Apostles, the term has always been used to degrade the people who believed and followed Jesus Christ. I recently listened to a series of podcasts by Andy Stanley who further expounded that the early so-called Christians did not call themselves Christians and Jesus actually called His followers 'disciples'. Now, everyone who has read their worth of the gospels will know that this is true, because Jesus wasn't the one who coined the term 'Christian' so that his foll…
3 comments
Read more

Apple of His Eyes II 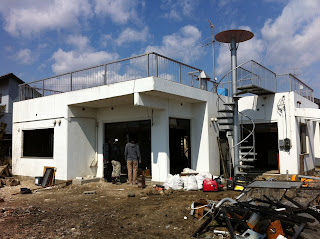 I just wonder where to start but I have to start somewhere. So I will start. In proper sense, it never made sense for me to go back to Japan for a second time to do relief work. Ming Siew's reaction, as she mentioned to me, summed up aptly. She couldn't believe that I was returning for a second time and there I returned.

The trip this time was a different type from the last one I went. This time was a two-week trip and I ended up with CRASH Japan Tono Base during the first week and back at Watanoha during the second week with OM Japan and Samaritan's Purse. I won't share much on the first week, since it was all mobile cafe and really, the time with CRASH was more of a warm up for me rather than proper work. I joined CRASH to want to grab a glimpse on the work they are doing. It is not to say that their work is not important in the grander scheme of things in the Kingdom of God but after my stint with CRASH, I just felt that the ministry in CRASH may not suit my personal…
Post a Comment
Read more

Everytime I watch this video, it makes me cry