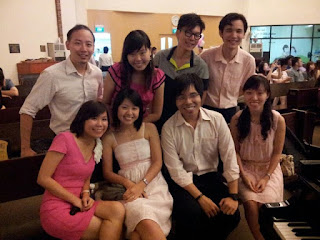 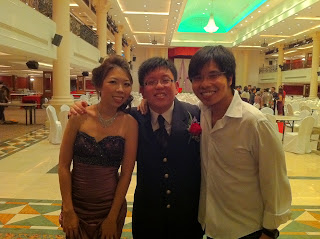 Today is the wedding of Robert and Melissa. As most would know, Robert is the goofy guy who brought me to know Christ some years back (he has since complained that his current weight is a result of the frequent late night suppers with me back then). Nevertheless, being happy for them, looking at them, I would never have imagined that I would witness the day he gets married. Maybe there are some people in my life whom I would not imagine the day of their marriage. Perhaps it's the surrealism that we were still so young and single in the good old days and then we realise that families are being started and formed as a result of matrimonial union.

Of course, in the midst of helping out with the wedding, there have been conversations about our own matrimonial futures. After all, every wedding we attend is an opportunity for the singles and unmarried to start fantasizing on their big day. It also becomes an opportunity for people to tease one another - today I was the victim....

Yet, as true as it might be that I can start fantasizing on the day of my own wedding, or the day when I propose marriage to whoever is with me at that time, I think I am still very contented to remain single for the time being. I believe a few ingredients are in place here. The most important being God Himself who have to be in the picture. Exactly how, I am still exploring and thinking and learning. However, for me, one thing is very clear, my first priority is the path and destiny that I know God has laid for me, which means that I can like any sisters I want but as long as the sister is not following the same path, it will thus become very difficult for me to go into a lifelong partnership with her.

Of course, I believe that being single comes with its perks. After all, as Paul said, an unmarried man is concerned about the Lord's affairs - how he can please the Lord (1 Corinthians 7:32). The perk being that I can have the time to serve God in whatever capacity that a married couple does not have. But definitely this does not mean I will have more capability but it just means I can have more flexibility in terms of time and space. And being single gives me the space to grow in the Lord and to make decisions in a carefree manner.

Yet I think we tend to miss out one important thing which Paul added in that passage as a qualifier:


Nevertheless, each person should live as a believer in whatever situation that the Lord has assigned to them, just as God has called them. - 1 Corinthians 7:17 (NIV)

After all, it's really more important to have a bearing on God's calling than to seek marriage without a sense of direction.

That being said, before I forget, I just want to point out something which I realise in my research about relationships. What happen in most literatures about godly relationships is that they are written and thought through without a consideration or exhorting the readers to consider the compatibility in vision. I may be overgeneralising here, but while I do realise that most of the examples I have read in the literatures (mostly from America) assumes that the couples' ministries will remain locally. Actually, it is often easier if the couples' ministries or callings are localised. More often than not, I realise that situations where people's vision becomes incompatible are not addressed, especially for aspiring missionaries. I am not sure if this is a situation that is peculiar to the context that I operate in. Yet, I just want to point out that if you are a single, and if you are sure that God is leading you to go church planting, there is no use in pursuing a girl who has set her heart away from that path.

Lastly, ending the whole post, my EJ160E made its debut today during the church wedding: 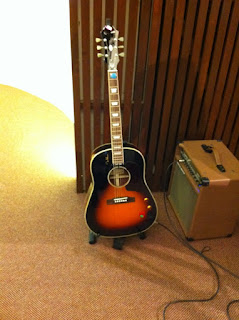 Popular posts from this blog

Parable of the 'Good Samaritan'

By Unknown - April 28, 2010
Once there was this man traveling from Jerusalem to Jericho, and he fell among thorns, and the thorns spring up and choked him. And as he went on, he didn’t have money, and he met the Queen of Sheba, and she gave him 1,000 talents of gold and 100 changes of raiment. And he got into a chariot and drove furiously, and when he was driving under a big juniper tree, his hair caught on a limb of that tree, and he
hung there many days, and the ravens brought him food to eat and water to drink, and he ate 5,000 loaves of bread and two fishes.

One night when he was hanging there asleep, his wife Delilah came along and cut off his hair, and he dropped, and fell on stony ground. But he got up and went on, and it began to rain, and it rained forty days and forty nights, and he hid himself in a cave, and he lived on locust and wild honey.

Then he went on ‘til he met a servant who said, “Come, take supper at my house.” And he made an excuse and said, “No, I won’t. I have married a wife, and I can’…
Read more

By Unknown - November 23, 2017
Hi, I have officially moved to another domain: http://reflectingtheologian.com. I will continue to keep this blog as my archive but my latest posts will from now on be posted there. Thanks for your support and readership.
Read more

Recently I was taking another course on the book of James. Similar to Romans, this is also a book that I have co-taught in church and studied in Eagles Rendezvous. Revisiting this book again yielded three reflection points.

The epistle by James is an interesting book within the New Testament to study. In my own NT study, I have also been fascinated by how economical the NT authors when it comes to their words - that they do not waste words in their letters. This manifests itself right from the beginning when the NT authors introduce themselves.

Many of us will sometimes skip over the introduction, but we can learn a lot about the epistle itself as well as its application to our Christian life through the introduction. In James, for example, James introduced himself as a slave of God and the Lord Jesus Christ (James 1:1). The original Greek reveals much more, placing the the possession genitive (of God and of the Lord Jesus Christ) before the word &…
Read more